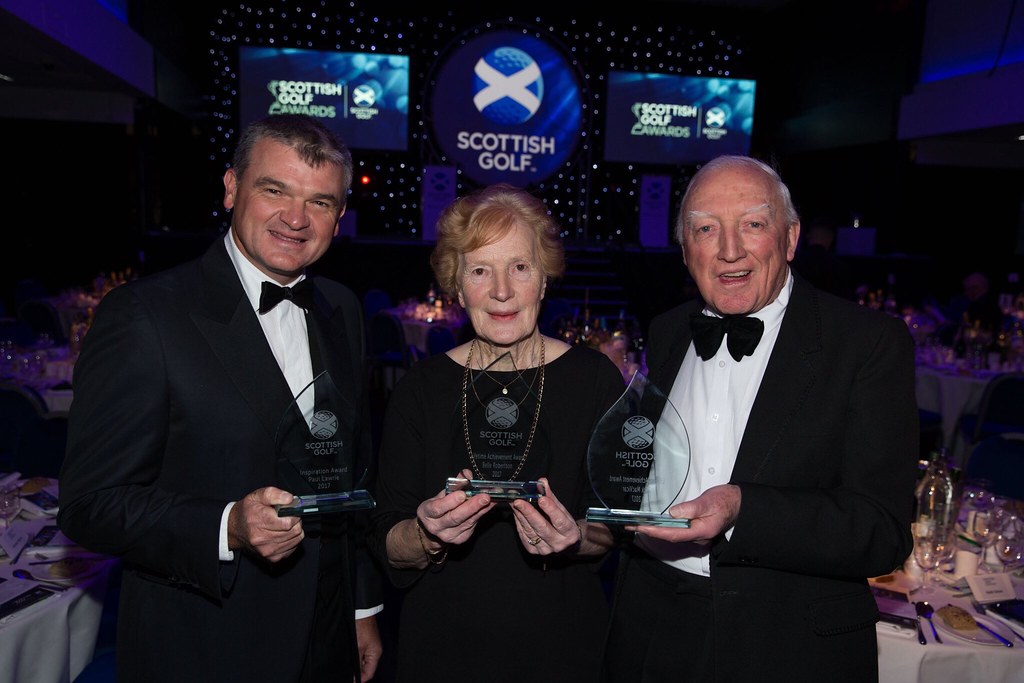 Two of the nation’s golfing stalwarts, Belle Robertson and Jock MacVicar, joined former Open champion Paul Lawrie in being honoured at the 2017 Scottish Golf Awards.The Dunaverty duo of Robertson and MacVicar saw their long-serving efforts on and off the course proudly recognised as they were honoured with Lifetime Achievement Awards on a glittering night in front of over 550 guests at the Edinburgh Corn Exchange.Belle Robertson, one of Scotland’s greatest ever amateur players, and renowned Scottish Daily Express golf journalist MacVicar, become the first non-Tour professionals to join the nation’s illustrious golfing ‘Hall of Fame’, alongside past recipients Lawrie, Colin Montgomerie, Sam Torrance, Sandy Lyle, Bernard Gallacher and Catriona Matthew.

Belle 80, a winner of a string of amateur events at home and abroad and a nine-time Curtis Cup player, said: “You always feel on receiving exciting news, such as a Lifetime Achievement Award, that it’s one of the greatest pleasures anyone could be given. Therefore, I‘ve been dancing with delight ever since Scottish Golf delivered this wonderful news. I feel very honoured and humble this should come my way.”

Our present clubhouse (our 3rd clubhouse was opened in June 2009 by international lady golfer Belle Robertson, originally from Southend, who, 49 years previously as Belle McCorkindale played 2 exhibition matches with our then Greenkeeper Duncan Fisher, to raise funds for our 2nd clubhouse.

Motion to Alter the Rules…

Motion to Alter the Rules…